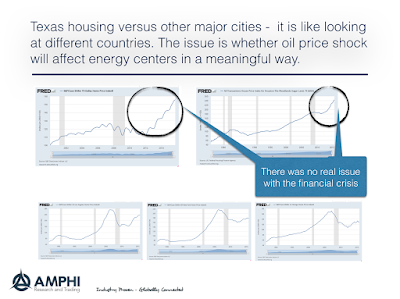 The oil price shock is affecting the oil patch. Companies are going under with most of the defaults in 2015 associated with commodity and energy names. Oil workers are getting cut with above average lay-offs relative to other economic sectors. However, the rest of the country is enjoying low oil and gasoline prices. Price decline shocks are always a trade-off between localized negative effects and positive macro effects.
What will surprise markets are the secondary effects, the spill-over to other sectors which were not expected.  We think housing markets in Texas and other oil regions may be affected. Just look at the price indices for Dallas and Houston versus the other major markets of New York, LA, and Chicago. Texas housing has actually increased its momentum since the Financial Crisis. The other three major cities have not matched pre-crisis highs.
We know that Texas is a much more diversified economy than during the oil shocks of the 90's or the 80's, but on margin, a flattening of housing price increases will have a meaningful economic impact on a key region. At a 2% growth economy, small regional changes will have a greater impact on the overall economy.
Facebook Twitter