New Zealand dollar is a canary (kiwi) in a coal mine 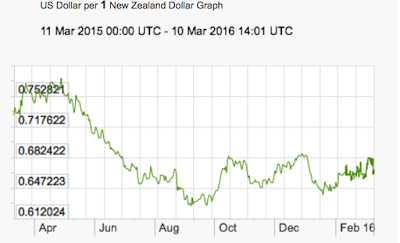 New Zealand dollar action is a canary (kiwi) in a coal mine. The central bank lowered rates by 25 bps to 2.25 percent which led to an immediate sharp currency decline. The currency has bumped up against a ceiling over the last few months and is now back in the middle of its range since the fall. Last spring and summer the NZD was declining based on potential Fed action.
As a small open economy that is tied to commodities and Asian trade, the NZD cannot afford to have an appreciating exchange rate. Interest rate action will have an immediate effect on exchange rates. The currency had appreciated about 4% since the central bank's December policy meeting projection.
Lowering rates is just a further sign that open economies have to take action versus the negative rate countries or face declining exports, rising currencies, and slower growth. The negative rate countries like Japan are exporting their deflation problems to the rest of the world. New Zealand just acted in a manner that will become all too familiar with other smaller exporting countries.
Facebook Twitter