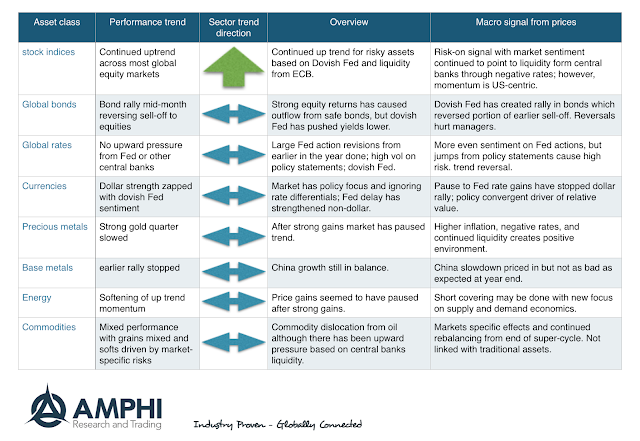 What was the main cause for the negative performance with managed futures for March? The reversal in sentiment across bonds, rates and currencies is the easy answer. Bonds were selling-off in early March as a result of the strong equity rally. The switch from less risk to riskier assets dominated the movement in financial futures. However, the change in sentiment mid-month from the belief in a more dovish Fed caused bonds and rates to rally and reverse the bond outflows. After the bond rally from the earlier equity sell-off, traders shorted positions in March only to find themselves wrong-footed toward central bank sentiment. Long-only bond returns were flat but active traders were hurt by the intra-month gyrations.
The dovish Fed sentiment carried over to currencies where trades based on the high rate differential in favor of the US were hurt. Currencies are expectational markets and the forward view is that central bank policies will converge not diverge. The dollar rally continues to be on hold.
The oil market continued to rally but the end of the month showed some downward price pressure based on the view that further supply cuts will not be forthcoming. Nevertheless, longer-term capital projects have been cut. This will provide a price floor.
Precious metals have been a big winner for the quarter based on higher inflation, negative rates and continued market uncertainty, but momentum slowed by the end of the month. Base metals which strengthened earlier in the quarter have become at best more range-bound based on lower but stable China growth and global growth that will be positive but modest. Commodities have moved on market-specific economics and not any common factor. The value of commodities outside of oil is their unique price behavior relative to traditional assets.
The only strong trend was in US equities. We have given sideways directions to other sectors because of the strong reversals during the month or the slowdown in momentum. A continuation of second half trends from March could mean better performance for CTA's, but positive bond and equity correlation is not usually expected for prolonged periods.
Facebook Twitter